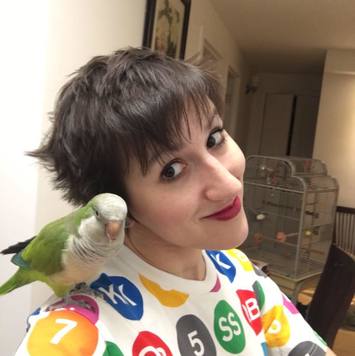 After two different books and several years of revision, I now have a book deal, and I'm set for publication in February 2018. My book is entirely a work of fiction, set in a neighborhood of West London where I used to live. A lot of people say you should write what you know, but I find it so much more interesting to write about people entirely different from me, in situations I will probably never face. That's what keeps it interesting...

I have a pet quaker parrot called Oscar. He hatched in July 2013 and I took him home at age ten weeks. In the months he has been in my life, he has accumulated quite a vocabulary, for better and for worse. Mostly, he enjoys chewing everything, especially my finger.

Back when I lived in London, I taught my budgie to cheer on England in the World Cup:


Speaking of the beautiful game, Tottenham Hotspur is my club. And yes, I know the offside rule, thanks.

I drink more tea than is strictly necessary, and then I review it on Steepster. ...OK, not very hidden. This is the traditional costume of the Biale Podlasie region of Poland. Looks a lot nicer than it feels on a 90-degree day in California. When I lived in New York, I danced at the Waldorf Astoria and in a Broadway theater.

I cook an excellent ackee and saltfish.

I briefly achieved infamy at Columbia University for telling the newspaper, "The years before us got Tony Kushner and Robert Kraft, and I've never heard of this guy" when the actor Matthew Fox was announced as our graduation speaker. The quote got picked up and syndicated in Denmark, among other places. His agent got in touch and I got a shout-out during the speech, which was surprisingly good. Start watching around the 30 second mark...

It should now go without saying that I can have a laugh at my own expense.

I have never been on a rollercoaster, and I have no plan to change that anytime soon, but I truly believe that despite this affliction I will be able to live a fulfilling and meaningful life.

Oh, and yes, I won a game show after auditioning on a whim and making it all the way through! The Chase has been on UK TV for years, and when I saw a casting announcement for the new American version shortly after moving to Boston, I decided to give it a try. It was my first time on television and I had a blast learning how it all works. Especially at this moment:

Then, in 2016, I made it to the Cup Final of nerd-dom, Jeopardy. Though I led for my entire game, I lost at the final question, becoming one of only two people in the history of the show to get every Daily Double, go into Final Jeopardy with that much money...and still lose. But I had a great time regardless. Furthermore, I lost to the Queen of Quiz herself, Dr. Cindy Stowell, who tragically died of cancer only weeks before our episode aired. My loss tipped Cindy's accumulated winnings into six figures, and after her passing, her family donated the money to cancer research.

Dumbing down education is my enemy.

Cities are my friends.